Inverness-shire is a huge county extending from the prime dolphin-watching site at historic Fort George near Inverness in the north, through to Glencoe in the south and from near Tomintoul in the east to Mallaig in the west.

This is a land of magnificent mountains, lochs, forests, abundant wildlife and superb coastlines offering some of the best scenery and attractions which Scotland has to offer. These include Glen Affric, the silver sands of Morar and Arisaig, iconic Eilean Donan Castle and, of course, Loch Ness itself.

One place visitors shouldn't miss is the site of the Battle of Culloden (6 miles east of Inverness off the B9006) where the Jacobites, under Bonnie Prince Charlie, were slaughtered in 1746 by the English army, led by the Duke of Cumberland (son of George I). This battle marked the end of the Jacobite rebellion and the old clan system and was shortly followed by the Highland Clearances. The battle site with its marked clan graves has a haunted atmosphere and the Culloden visitor centre has an audio-visual presentation depicting the battle. 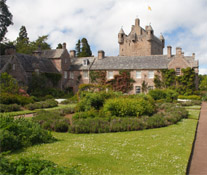 Further east is the 14th century Cawdor Castle, referred to in Shakespeare's Macbeth, which is still inhabited by the Campbells of Cawdor. The interior has interesting dungeons, secret passageways and fine tapestries whilst the grounds include a maze, walled garden and nature trails. East of Inverness on the B9039 (off the A96) is Fort George, built in 1769 for George II's army and still used as an army barracks. The interior has a regimental museum and chapel and the views from the ramparts across the Moray Firth and towards the great Glen are magnificent.

The Moray Firth becomes the Beauly Firth to the west of Inverness and the Kessock Bridge. The A862 leads to Beauly and the ruins of the 13th century Beauly Priory, destroyed during the Reformation.

The Beauly Centre includes an old shop and displays about weaving. Muir of Ord, 4 miles to the north, is famous for the Glen Ord Distillery and there is a winery at Moniack Castle, 4 miles east of Beauly.