In September 2015 a brand new railway service for the Scottish Borders was opened to link the area up with Midlothian and Edinburgh. The Borders Railway has made the whole of the Scottish Borders much more accessible with the service running right up into Edinburgh’s central Waverley station, from which there is access to the rest of the UK’s rail network. 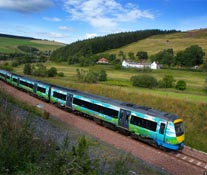 The service starts at Tweedbank and reaches Edinburgh in under an hour, with stops at Galashiels, Stow, Gorebridge, Newtongrange, Eskbank and Shawfair along the way. Special steam train journeys have also been planned on the route for people wishing to relive the ‘golden age of travel’.

The line has not been operational since 1969 so the new service really benefits both locals and visitors to the area by allowing easy access to the bustling capital of Edinburgh for day trips and evenings out.

The Borders Railway service runs at half hour intervals and fares are as follows: