Kirkcudbrightshire is pronounced with true Scottish economy as ‘Kirkoobrae’. On the coast there are superb beaches at Southerness, while inland there is fishing and sailing on Loch Ken and in the Glen Trool Forest Park, which also offers great walking and cycling. 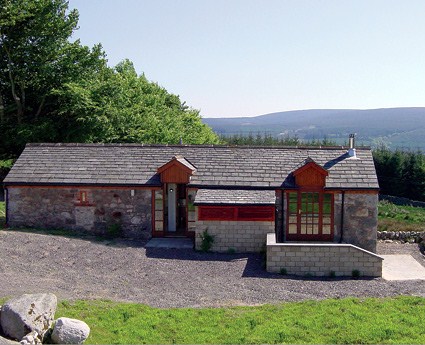 Kirkcudbright is an attractive town to the south-west of Castle Douglas, overlooking Kirkcudbright Bay. Its restored 17th and 18th century High Street with narrow wynds and its working harbour attracts many visitors to the area - and was a magnet for artists from the late 19th century. 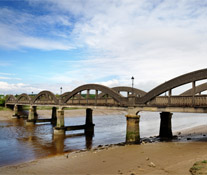 One Georgian townhouse, Broughton House, home of the artist Edward Hornel (1863-1933) who encouraged the 'Glasgow Boys' to establish an artists' colony there, is open to the public with examples of his work on display. The nearby Tolbooth Arts Centre depicts the town's development as an artists' colony and displays some famous works by Peploe and Hornel, and further art exhibitions are to be found in the Harbour Cottage Gallery.

The 16th century MacLellan's Castle by the harbour was built as a mixture of fortified castle and comfortable home which reflected the increasing stability of the area at that time. Its interior is well-preserved and features the 'laird's lug' behind the fireplace in the Great Hall used as a hiding place by the laird to eavesdrop on his guests. The Stewartry Museum on St. Mary's Street has a fascinating display of memorabilia of the Solway Coast.

The pretty villages of New Galloway, St John's Town of Dalry and Gatehouse of Fleet, are well worth a visit, as are Threave Castle and Gardens. Bird lovers should not miss the red kite feeding station near Castle Douglas, where these magnificent birds mass every day to be fed. For the more energetic, you can follow the entire Red Kite Trail round Loch Ken. With little light pollution the area is also famous as a Dark Sky Park and is one of the first in the country.

Other attractions include wildlife river trips from the marina, the Wildlife Park on the B727 east of the town and, 3 miles north-west of the town, the David Coulthard Museum in Twynholm, the Formula I driver's home town.

West of Kirkcudbright off the A75 is Gatehouse of Fleet which developed in the 18th and 19th centuries as a cotton mill, shipbuilding and brewery town but its main industries now are tourism and forestry. It occupies a beautiful setting on the banks of the Water of Fleet. 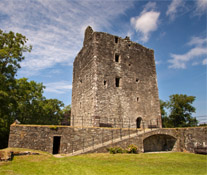 Visitor attractions include the Mill of the Fleet Museum in a converted cotton mill with a working water wheel, which relates the history of the industry and the local area, and the exclusive Cally Palace Hotel which has gardens open to the public. Another local hotel is the Bank O' Fleet which provides meals and entertainment. The 15th century Cardoness Castle lies about a mile south-west of the town. It was originally the seat of the McCullochs but bought by the Gordon clan in the 17th century, resulting in further rivalry between the clans.