Gift Vouchers Make the Perfect Present!
Why not treat
a loved one to
the break they
deserve?
BUY NOW!
Home Destinations South of Scotland Edinburgh & the Lothians Edinburgh & Midlothian More about Edinburgh
List Map

There is so much to see and do in Edinburgh and so much history to explore that a week's holiday may not be enough for you to fit everything in!

The 'Old Town' refers to the area around the cobbled Royal Mile (running down from the castle to Holyrood Palace) which is characterised by tall 16th century tenements and narrow wynds. At that time, it was an over-crowded and smelly area (waste being thrown out the windows onto the street) until the loch where Princes Street Gardens now stand, was drained and the New Town built in the 18th century. 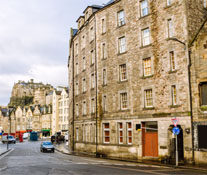 There are many attractions along the length of the Royal Mile, including: the Outlook Tower and Camera Obscura; the Assembly Rooms of the Church of Scotland; Gladstone's Land, featuring painted ceilings and 17th century furniture; the 15th century St Giles Cathedral where the protestant reformer John Knox was minister 1559-1572; Real Mary King's Close (including the underground rooms where the poor lived in the 16th century); the Museum of Childhood; the 15th century John Knox's House; and the Museum of Edinburgh. The narrow wynds and historic buildings provide a spooky atmosphere for the various ghost tours of the Royal Mile.

At the foot of the High Street is the new Scottish Parliament building (designed by the Spanish architect Enric Mirales and whose soaring cost and design have caused great controversy in Scotland). It stands opposite Holyrood Palace which was the 16th century home of Mary Queen of Scots and now the Royal family's official Scottish residence (the palace is closed when they are visiting). The tour of the palace takes you through the royal apartments, the Great Gallery where many portraits of Scottish kings are displayed and Mary Queen of Scots' bedchamber (linked to her husband's room by a secret stair).

Nearby is the dome of Dynamic Earth which has an array of hands-on exhibits for children about the local geology and environment. There are magnificent views of the city and the Firth of Forth from Arthur's Seat, near Holyrood Palace, which dominates the skyline and offers a retreat from the bustling city and a taste of the countryside. The park road leads to Duddingston Loch and the 12th century Duddingston Kirk.

South of the Royal Mile

The Grassmarket was the site of the gallows, which were used to hang the Covenanters amongst others, and the site of the Burke and Hare murders in 1827. It is now an interesting area of pubs, restaurants and boutiques.

Nearby are the 19th century Royal Museum and the 1998 Museum of Scotland, both in Chambers Street. Across the road, you will find the 17th century Greyfriar's Kirk where the National Covenant was signed, reaffirming the independence of the Scottish Church from the English episcopacy. However, the church is better renowned for the statue of Greyfriar's Bobby, the faithful terrier who guarded the grave of his master.

City Centre and the New Town

Below Princes Street is the New Town, built in the 18th century to relieve the over-crowding within the walls of the Old Town where the population increased from 2,000 in the 14th century to 20,000 in the early 18th century. The Georgian House in the Robert-Adam designed Charlotte Square, depicts how wealthy 18th century families lived.

There are many museums and art galleries in the city centre and the New Town to suit all tastes, such as the National Museum of Scotland, the National Gallery, the Gallery of Modern Art, the Dean Gallery and many small contemporary galleries.

Within the city centre, there are theatres, designer shops (such as Harvey Nichols and Jenners) and a huge range of restaurants, pubs and clubs to suit all tastes. The centre is overlooked by Calton Hill at the east end of Princes Street which offers extensive views of the city and the Firth of Forth. The harbour area at Leith has great pubs and restaurants along the docksides, and it is here that the Royal Yacht Britannia (now open to the public) is moored, beside the Ocean Terminal shopping mall. 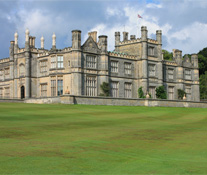 Beyond the northern edge of the New Town, are the beautiful and peaceful Royal Botanic Gardens and the quaint Stockbridge area with a range of antique shops and boutiques. Other places to visit outwith the city centre include Edinburgh Zoo in Corstorphine and the quaint village of Cramond, site of a Roman fort and 15th century church, which lies on the banks of the River Almond at the north-west edge of the city. The 18th century stately home and gardens, Dalmeny House, lies on the opposite bank of the river.

There are ample leisure opportunities for those with any energy left over after exploring the sights in the city. Edinburgh has many golf courses, swimming pools (including the Commonwealth Pool), off-road cycling and many walking routes (including tours of city sights, the Union Canal Towpath, the Water of Leith Walkway and on the Pentland Hills), horse-riding in the Pentlands and sailing at Port Edgar. 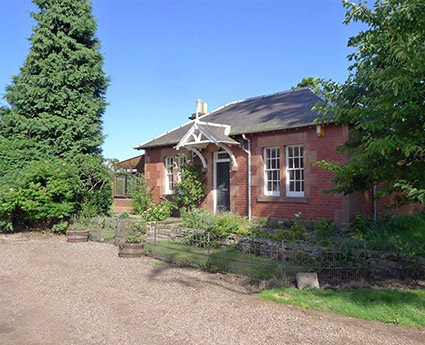