Back to Latest News
Book Your Holiday

Can't Find What
You're Looking For?
Give us
a call:
01835 822277
Home Latest News Scottish Borders
Find Your Holiday

The Scottish Borders are often overlooked by holidaymakers as they head further north but the area actually has plenty of attractions. As well as its peaceful landscape of green hills, lush forests, winding rivers and sweeping valleys, it has a whole host of activities to keep visitors busy and entertained. We have a wide range of holiday cottages across the whole of the region offering excellent accommodation from which to explore everything that is on offer.

As it is spread across the south of Scotland, the area is relatively easy to get to, so petrol costs and driving hours are dramatically reduced. It is also soon becoming more accessible than ever thanks to a new rail link that opens in September 2015.

The Borders Railway route will link the Borders up to Midlothian and Edinburgh and make the whole area much easier to access by train, stopping at Tweedbank, Galashiels and Stow and running right up into Edinburgh's Waverley station. It will also give visitors to the Borders much better access to the bustling capital of Edinburgh for day trips and evenings out.

There are a whole host of activities to get involved with, including a wide range of walks for different abilities. Those with stamina can try sections of the 60 mile St Cuthbert's Way which starts at pretty Melrose and ends at Lindisfarne out on Holy Island, off the coast. The Southern Upland Way also crosses the region and within its 212 mile route are lots of different walks of various lengths. 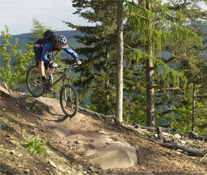 The quiet Border roads are great for cycling and there is the 88 mile-long Tweed Cycleway that runs right across the region from Biggar to Berwick-upon-Tweed to make good use of. The area is also a mecca for mountain biking with two of the famous 7 stanes centres offering some of the best mountain biking in the UK. Glentress near Peebles is internationally renowned and offers varied and challenging off roading with singletrack of all grades, excellent green and blue routes and a red route that has a famous ‘Spooky Wood’ descent. A few miles south is the centre at Innerleithen that is known for its outstanding downhill routes that are suited for more experienced riders.

The region is renowned for its rugby and the town of Melrose is home to the international rugby sevens competition, the Melrose Sevens, that is held every April drawing huge crowds of spectators with its carnival-like atmosphere. There are plenty of 9 and 18-hole golf courses throughout the Borders where visitors are made most welcome, the most famous being the championship Roxburghe course near Kelso. It is owned by the Duke of Roxburghe himself, whose grand residence at Floors Castle is open to the public.

The River Tweed flows across the region following the border with England in many places. It is well known as one of the top salmon fishing rivers in the world and rods are available at many different points along its route. 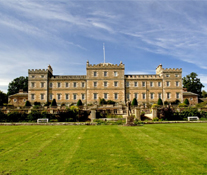 The region has a stormy past, as its ruined abbeys, ancient keeps, castles and imposing stately homes all bear witness. Constant battles were fought over the border between England and Scotland in the 16th century and between the 13th and 17th centuries, clan feuds involved regular attacks by the Borders Reivers on each other's castles and keeps, the ruins of many of which are still standing. This period is commemorated by the colourful Common Ridings in many Border towns during the summer months, with a week of local festivities and horse processions.

There are four historic Abbeys in the Borders that were founded in the 12th century – Melrose, Dryburgh, Kelso and Jedburgh. Melrose Abbey houses a container that is said to hold the heart of Robert the Bruce. There are also many other stately homes in the region such as Mellerstain House near Kelso, Manderston House near Duns and Paxton House near Eyemouth. With a wide range of self catering holiday cottages across the whole of the Scottish Borders we certainly have something to suit every taste.