Northern Perthshire covers the area from Pitlochry north on the A9 and the area west of Pitlochry following the B8019 past Loch Tummel and Loch Rannoch. Such an expanse brings a variety of landscapes, from the fertile, gently undulating south, to spectacular Highland Perthshire with such beauty spots as Lochs Earn, Tay, Tummel and Rannoch and imposing mountains such as Ben y Vrackie, Schiehallion and Ben Lawers.

A Packed Itinerary of Places to Visit

The area offers a host of attractions, walking and climbing of course, skiing at Glenshee, riding, cycling, fishing (the Tay is one of the great salmon rivers), sailing and even canoeing, to name but a few. 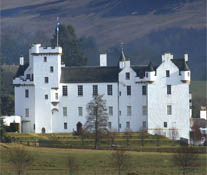 An interesting stop just 4 miles north of Pitlochry, is the Pass of Killiecrankie where a soldier escaped his enemies at the Battle of Killiecrankie in 1689 by jumping over an 18-foot gorge (the Soldier's Leap). The visitor centre provides information on the Jacobite Rebellion and local flora and fauna, and there are attractive walks through the woods.

Blair Atholl is a good centre for walks and cycle routes, but its most popular attraction is the 13th century Blair Castle, nestled deep in the Grampian foothills. The seat of the Duke of Atholl, part of it is open to the public, including a splendid ballroom. A few miles north is the House of Bruar, a modern complex containing a large restaurant and many shops selling Scottish produce and country clothing.

With glorious scenery and much of historic interest, it also has the benefit of an excellent infrastructure of roads and facilities, making it easy to take in a great deal in a short stay, whilst also being within an hour's drive of both Edinburgh and Glasgow.